An electric car built by students beat Tesla in speed

Tesla has been overthrown by Sunswift’s eVe, an electric car that has been designed by Australian university students.

The test drive covered 120 laps on a 2.6-mile highway circuit at the Australian Automotive Research Centre. It involved two drivers driving in three stints. During this time, the panels were switched off since the team was interested in setting the record for the fastest electric car. Solar powered cars are in a different category.

The other objective of the test was to prove that the car is ready for practical use on the highway. As a student run university project, it is also aimed at educating and training the future engineers by working on a practical project. 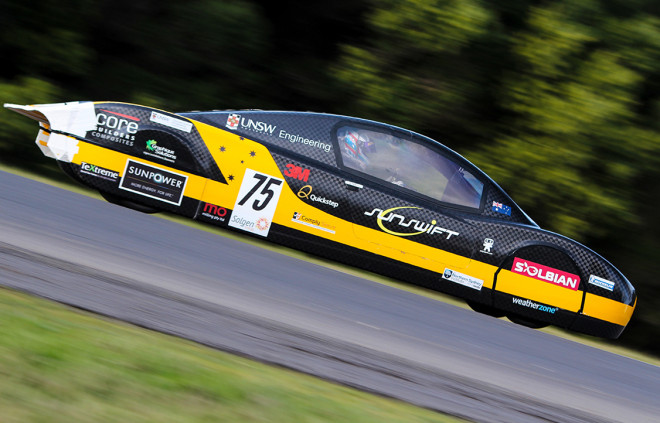 The test showed that the car can drive hundreds of miles at a reasonable highway speed without requiring to be recharged.

eVe looks elegant and lovely. Its battery can be charged from a regular wall outlet or even using solar panels on its roof and hood.

The eVe is the fifth vehicle produced by the students from the University of New South Wales.
Its predecessor Ivy was produced in 1996 and it still holds the record for the fastest drive by a solar-powered car. It knocked 55mph in 2011.

But it is the eVe that looks promising. The prior vehicles had only three wheels, a driver’s seat and a pile of solar panels.

The eVe has seats for two adults and is more or less like a regular car of course without the features or comforts you would find in today’s luxury cars. It is Spartan to keep its weight low.

eVe’s 8-pound Panasonic battery takes 8 hours to charge using the household outlet. But if you use an industrial port, it takes only 5 hours. And if the car is packed in the sun for 8 hours, the 800-watt solar panel will provide it with enough power for a two-hour ride.

The panel also collects solar power while it is driving but this is not at a rate that can replace the power being consumed though it can extend the distant it can cover a bit.

Sunswift wants to inspire commercial research into the technology and at the same time want to make eVe the first road-legal solar powered car in Australia.

The team will still need to do a lot to get this approval. For example, the parts of the car both internal and external will need to be brought up to the standards required by the proper authorities. But the team hopes they can do this within a year.

The speed record is also yet to be approved by the FIA which is the body that governs world motorsport.

It is now a matter of wait-and-see as to whether their self-imposed timeline will be enough to allow them come up with commercially viable electric cars, and may be in a year’s time we may see the electric and solar-powered cars on Australian roads.