Master of Craft is a new free-to-play building and business simulator, developed by IdeaBox Games. The aim of the game is to create a large empire of buildings, all creating tools for battle. The larger the pot of gold, the more items that can be crafted.

This is a rather unique scenario, instead of taking charge of a whole city and trying to develop several different areas of growth, like in Clash of Clans, the new Master of Craft game focuses purely on building armor and weapons. 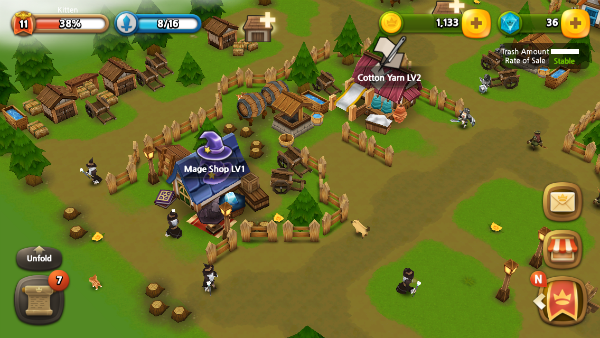 The economy works in a simplistic fashion, once you craft a sword or piece of armor, players from the world (AI) will turn up and acquire the weaponry. Players can push their prices up or down, pushing sales up will result in slower income but large quantities.

Once past the tutorial stages, the player is able to build more and create more weapons and armor and sell them at a higher price. The town will grow as the player levels up and the player will be able to go out and fight monsters for rare materials, bringing a PvE element to the game.

Players do not control the fight directly, but offer different moves and abilities for the adventures when they fight monsters. Questing is a direct part of growing the economy and making sure rare materials and quests are found.

Like most free to play simulation games, the interface is designed to make the game as simple as possible. For mobile fans, this might be fine and it definitely allows the player to get nestled into the ecosystem quickly, instead of having to learn all the tricks of the trade.

Opening up menus is quite fluid and the movement around the camp works well. We did not experience any lag within our playthrough of the game and found the animations and movement to be rather well designed, if a little simplistic.

Audio is rather repetitive but nice background music without a lot of depth or character. It makes it easy to listen to while doing the same thing for a few minutes, without being too loud or too abstract to really warrant questioning.

The all important issue with free-to-play, the in-game business model. Like most, Master of Craft has decided to do a split currency, one part in-game and one part bought by the player. The in-game, known as gold, will get simple things like wood sticks, allowing the player to use the wood sticks to build swords.

The other part, gems, allows the player to speed up gameplay, buy higher leveled weapons and generally skip a lot of the grinding. The gem price is fair, compared to other free-to-play games, but we definitely feel like it is there too often, on almost every page there is a gem button, allowing the player to step past the grind.

Master of Craft is a fine experience, it has enough content to keep someone excited for a few days and the different quests keep people entertained. The grind levels aren’t all that annoying, it might take a few hours in the higher levels, but that shouldn’t be a worry.