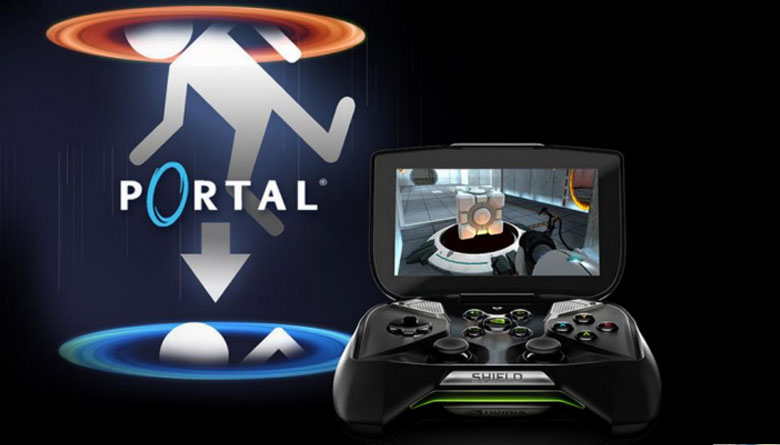 Valve has announced they will be porting Portal, their critically acclaimed first-person puzzle game; to the Android console NVIDIA Shield. It is the first time Portal has been officially ported to a mobile device and shows the power on the NVIDIA Shield, enough for Valve to take interest.

This is potentially the biggest port onto the NVIDIA Shield, Portal has sold millions of copies and porting it to the Android console could be a big boost in sales. There is currently around 300 supported games running on the NVIDIA Shield, Portal will join this group soon.Valve’s Doug Lombardi said they have had a strong relationship with NVIDIA in the past and find the Shield “very powerful and unique” device, something they want to work on more in the future. We hope to see potentially Half Life ported over to the Shield.

We are starting to see more of these 2000’s games ported over to iOS and Android. The mobile devices now have processors and graphics chips powerful enough to run these console and PC games without sufficient lag, although mobiles do have the issue of no controller.

Since the NVIDIA Shield has its own controller, it has allowed Valve to port over the game and not add mobile touch-screen controls, something we doubt the PC games manufacturer would be too happy on doing.

The NVIDIA Shield did have some early success, going out of stock in the opening weekend. We have not heard from the Asian manufacturer on how well the Shield is doing past the six month mark, something we would like to know given the failure of the Ouya console.

Android mini-consoles have been hit with a lot of questions and Ouya has failed to make a profitable market on the hardware side, we wonder if NVIDIA will continue to support the Shield or if this is the last generation, the Valve Portal port gives some hope.