All over the world, there are millions of people who eat their meals using chopsticks. But what happens once a meal is finished? That is right; the chopsticks are thrown away. They end up contributing to the pollution of the planet, even if they are made of wood. In an effort to save the environment and reduce the pollution degree, startup companies have started to collect used chopsticks and turn them into valuable products. The idea is interesting, especially if we stop for a moment and think about how many chopsticks are tossed into the trash, each and every day.

Chopvalue, A Startup Company With An Example To Offer

ChopValue started collecting used chopsticks from Vancouver restaurants, hoping to contribute to the environmental cause and turn these small wooden items into useful products, such as coasters, shelves and even tabletops. The idea proved to be more than successful, demonstrating that there is hope for the future of the planet.

Not many people would think to recycle chopsticks, especially since these are so readily available. Both wooden and bamboo chopsticks share the same faith, being used for just one meal and then thrown into the trash. The owners of the restaurants were asked to collect the discarded chopsticks into separate bins, gathering around 250000 chopsticks per week. In fact, since the company was launched one year ago, more than 2.5 million chopsticks have been recycled.

Consumerism, Chopsticks And Other Single-Use Products

If you have ever eaten at an Asian restaurant, you have probably used chopsticks yourself. These are, however, not the only products we use on a regular basis, without thinking about the possibility of them being recycled (and thus the pressure on the environment is reduced). Environmentalists have been trying to draw attention to the consumerism concept and the overuse of such products for a long time now. The list includes not only chopsticks but also straws and plastic cups, forks, etc.

According to the most recent statistics, approximately 100000 chopsticks are thrown into the trash on a daily basis (statistic valid only for Vancouver). While it is true that many other single-use products may be recycled, in reality, the majority of them go to the landfills. Here, they take a various amount of time to decompose, releasing those nasty greenhouse gases into the atmosphere. Without even knowing, we are contributing to the climate change, even if it is only in a small percentage.

If you stop for a moment and think, you would easily reach the conclusion that chopsticks decompose faster than other products (such as those made from plastic), as they are made either from wood or bamboo. This is quite true, as plywood has a decomposing period that varies between one and three years. While this does not seem like a big deal, you have to take into consideration other factors as well. Chopsticks are easily thrown into the trash and end up in a landfill; however, a lot of energy is required for their actual production and transportation. Thus, the idea of recycling chopsticks makes a lot of sense, especially with regard to the energy that can be saved.

You are sitting in a restaurant, eating a bowl of noodles, with the help of chopsticks. But did you ever stop to think where do those chopsticks come from? Well, imagine a beautiful bamboo forest in China. Chopsticks are mass-produced; a company will harvest the bamboo (or another type of wood) and send it to the manufacturer. Once the chopsticks have been produced, they will travel amazing distances, in order to serve the increased need for such tableware. In the end, they are used for only one meal and then end up in the trash. 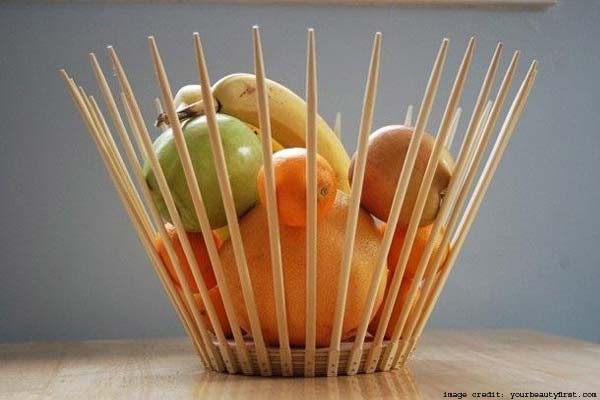 Startup companies, such as the one mentioned above, are doing their part for the environment. They are developing their own practices and recycle single-use products, such as chopsticks; the result of the work is amazing, with chopsticks re-appearing on the market, in the form of tables, yoga blocks, and shelves. More importantly, these products are sold online, being widely appreciated for their uniqueness.

We live in a world defined by consumerism. This has definitely left its mark on the planet, with more and more greenhouse gases being released into the atmosphere on a daily basis. The idea of recycling single-use products, such as chopsticks, could reduce the overall carbon footprint and improve the health of the planet. Apart from chopsticks, companies might decide to recycle other products that often end up in the trash, such as plastic tableware, paper cups, and wooden stir sticks. The main idea is to take such products and turn them into useful products, which could be used for a longer period of time. At the same time, it is important to follow the example set by such companies, raising awareness about the state of the planet and pollution in general.