How To Decorate With Balloons | Awesome Balloon Decorations 2018

Balloons were first invented by Michael Faraday in 1824 for use in military laboratory experiments. By 1847, rubber balloon kits were being sold in London for entertainment purposes and quickly became a favorite decoration item for parties and celebrations. In 1907, balloons were being sold in America as one of the most popular party favors and have only gained more popularity since that time with the invention of sausage balloons for balloon animals and foil balloons with all sorts of messages. Sky lanterns, a form of hot air balloon, have been popular for centuries for celebrations in East Asia and are still used to today. Everyone loves balloons. They are festive, fun, easy, and provide inexpensive ways to decorate for any celebration. If you are looking for interesting and unique ideas for room decoration on a low budget and other decorations for the home ideas, there are plenty of fun balloon decorations that will suit everyone’s whimsy.

Benefits of Decorating a Room with Balloons

There are a multitude of benefits for decorating a room with balloons. First and foremost, they are inexpensive and readily available at any party store, major department store, grocery stores, and dollar stores. They are also a colorful and festive addition to your party decor and can be tailored to any theme. They are great to fill empty space or to provide ceiling decorations if you opt for helium balloons. And most importantly, everyone loves balloons! 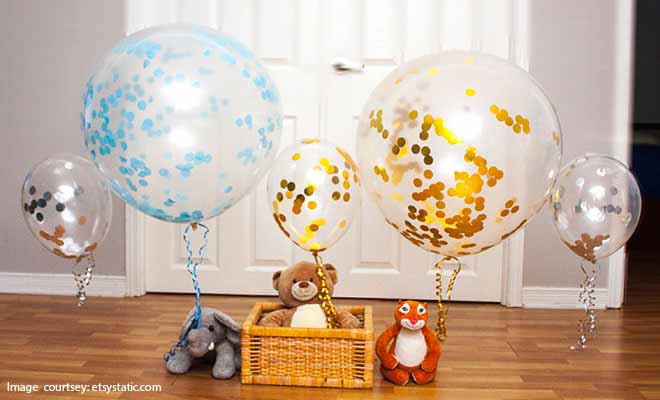 Confetti adds a fun new dimension to standard balloons. You can purchase pre-filled confetti balloons or you can make them yourself with standard rubber balloons. Just purchase giant balloons and some confetti and then slowly add as much confetti as you would like, a little bit at a time allowing for static to build up so the confetti sticks to the inside of the balloon. Then fill the balloon with helium, tie it, and add a ribbon. If the confetti is clumping, just give the balloon a shake to distribute the confetti more evenly. To create more static, be sure to touch each piece of confetti when inserting it into the balloon.

A balloon party kit is a great way to personalize your party decorations in style. These kits include white balloons, metallic gold streamers, glittered letters and star stickers to apply personal messages on the balloons, and gold striped twine for string.

A great idea for a kid’s party is tying balloons to favor bags. All kids love balloons and all kids expect party favors these days. So why not combine these two favorites at your child’s next birthday party using the favor bag as the balloon weight?

Looking for cool birthday party table setup ideas? Glowing balloons are a fun way to add some interest to your table decor. All you need are some colorful balloons and multi-colored glow sticks. Activate your glow sticks. Then inflate a balloon and drop a glow stick inside before tying. Place your glowing balloons down the center of your table. You can also float glowing balloons in a swimming pool for some mood lighting at an evening party or attach them to the ceiling with heavy duty tape. 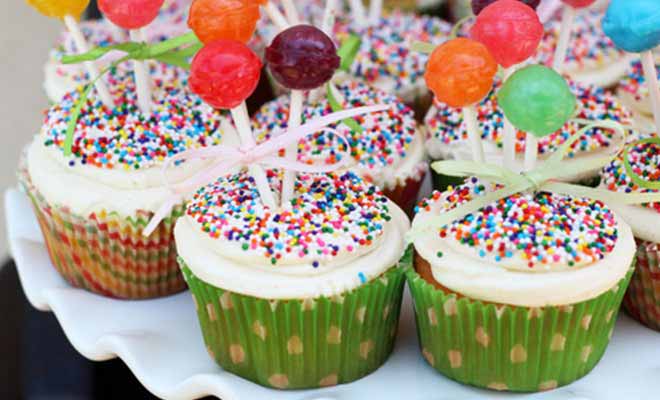 A fun way to decorate the tops of your party cupcakes is to make some balloon cutouts from cardstock and use paper clips twisted into the shape of balloon strings to insert into the top of the cake. Be as creative as you would like!

A fun romantic balloon decoration idea for Valentine’s Day or a wedding photo booth backdrop is a giant heart shaped backdrop made from balloons. First project a giant heart shape onto the wall where you want to affix the backdrop and trace lightly with a pencil for your outline. Fill the outline with strips of double sided tape. Inflate different sizes of balloons in the color scheme of your choosing and begin attaching the balloons to the wall. You can even create an ombre effect by using similar colored balloons.

You can craft your own ceiling swirls from poster board or cardstock by cutting out spiral shapes in a variety of colors. Pull the spirals out so they have a springy appearance and attach to the ceiling with tape.

A fun way to jazz up an ice bucket at your next celebration is to fill small balloons with water and freeze them. Fill your drink bucket with the frozen balloons and add your beverages.

There are so many creative ideas for decorating with balloons. You can create a chandelier effect by attaching photos to the strings of helium filled balloons and allowing them to float to the ceiling. You can cover a slip and slide with water balloons for some extra fun for a summer party. You can decorate your balloons with paint, glitter, pom poms, markers, or anything else you would like. You can create all sorts of shapes and balloon images just by using your own creative thinking. The only limitation to decorating your next party room with balloons is your own imagination.