Just recently, Elle Fanning stepped out in the perfect modern-day Disney-princes dress that awed almost everyone in to obsession. It has come to our attention that the 16-year old starlet is a fashion genius—she is accustomed to runaway looks back at the time when other kids would be thinking of their dress preferences in a seven-grade homeroom.

This looks like a very significant deal where we are being taught intellectually, near esoteric, avant garde fashion by a teen. It could be the reason why she has been killing it sartorially in anticipation for the premiere of “Malificent” set for May 30.

At the premiere of Sofia Coppola’s “Somewhere,” the teen acted as Stephen Dorff’s daughter in the movie. Elle pulled of the conceptual gold mini-frock by Rodarte matching it straight with the runway Nicholas Kirkwood platforms—with socks layered under. 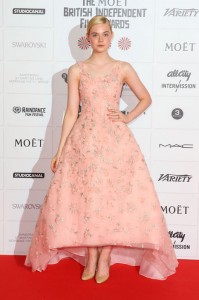 She put on a ripped-from-runaway ensemble acquired from Prada Spring 2013 at the Twilight Saga premiere entitled Breaking Dawn. Elle also made headlines for debuting the much controversial Japanese flatform sandals she got from the collection.

During the British Independent Film Awards in 2012, Elle appeared more like a dream. Fans were envious of the 14-year old wardrobe which houses a pink rise-fall dress made by Oscar de la Renta which she loves most.

At AMPAS in 2013, Elle balanced lady like and menswear-inspired in Satiny Cavern dress accompanied with black-and-white Celine creepers.

On the Malificent, Elle worked on the season’s hottest crop top and high-waisted skirt promo which she paired with a creamy ruffled set by Ellery.

Thumb up to Elle for wearing a pink dress and failing to appear like she is going to a school dance or Easter service.