Is Anjela Too Pretty To Be A Nun?

In her own words, Anjela confesses that whenever she tells people she’s going to be a nun they get shocked, their jaws drop, their eyebrows shoot up and their beers spill onto the bar.

Some say she’s too normal to be a nun, while other believe she’s too smart and pretty, qualities that they can’t expect in a nun.

The claim that she’s too pretty to be a nun is what took her by surprise. It made her feel as if to qualify as a nun, one needed a big nose or acne – to look ugly.

Her looks have even been addressed by the religious communities she has visited as she sought the spiritual home. Three different orders seized on her name and took to calling her Angela Jolie.

People are baffled that her exterior could reflect an interior longing for sanctified life and its seemingly old-fashioned vows of poverty obedience and celibacy.

These questions have force Anjela to confront her self-image. She wonders who she sees in the mirror, and how she appears in God’s eyes, and how these affect each other.

When she lived with the Poor Clare nuns in Belleville, she discovered that their monastery has no mirrors. This shocked her at first but later it became quite liberating for her. She felt free to be who God designed her to be and more fully accustomed to the people around her. 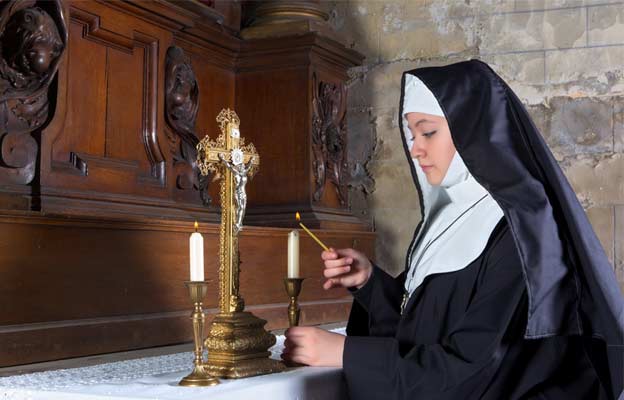 She could pour the energy she used to invest in her appearance into her spiritual life, rather than fretting over the image in the mirror and trying to alter it.

Anjela says she is now prepared to respond when someone quips that she’s too pretty for the convent. She tries to be gracious and takes such comments with a grain of salt knowing that it’s more about them than her.

She has come to appreciate such conversations as they give her the opportunity to dispel stereotypes about nuns. That’s why she’s grateful for the creation of the National Catholics Sisters Week, an official addition to the National Women’s History Month. The event is meant to raise understanding and awareness of Catholic sisters.

Currently, there are 1,000 U.S. women who are in some stage of formation, and Anjela believes it’s time they tell their stories.

Anjela was raised Catholic in a loving home in Belleville, Illinois. She envisioned a white-picket-fence future of marriage and motherhood and even got engaged at some one point. But she was always seeking for something more – she yearned for service and simple living.