Technological innovations are just some of the things that rise from nothing to becoming huge players in the whole world.

Imagine the impossibility that was connected to artificial intelligence and compare that with its current use in each aspect of the economy today!

Well, for some, it might still be in its baby growth and taking smaller steps to reach the desired final goal, but the Boring Company is saying that anything is possible with a small amount of innovation and an opportunity.

They recently came up with an innovation that was being considered a huge joke by many around the world. In fact, no one took Elon Musk seriously.

However, with the recent developments, it seems that his innovation and dream must just come to fruition. In fact, the project just took a serious turn and we are waiting to have the first look and give our opinions diligently.

Well, the wait is finally over. There is no need to hold your breath since there is nothing that is so breathtaking about this project except the fact that it might save you time spent on the traffic each day if it indeed is endorsed.

Elon Musk just shared a video on the progress that he has made over time. The video shows a model of the so called Tesla Model S being lifted using an elevator from the underground. This is quite cool but it is still not so ground breaking.

In addition, the released video offers a peep at the area where the Boring Company is building its first set of tunnels under the city presumably.

It has not actually been marked and confirmed by the company itself, but it is clearly visible on the video.

As the vehicle is being lifted to the ground by the elevator, a tunnel entrance can be seen. The elevator itself isn’t so interesting but the fact that this is a project that has already taken off, and more is expected from it, if far more interesting. 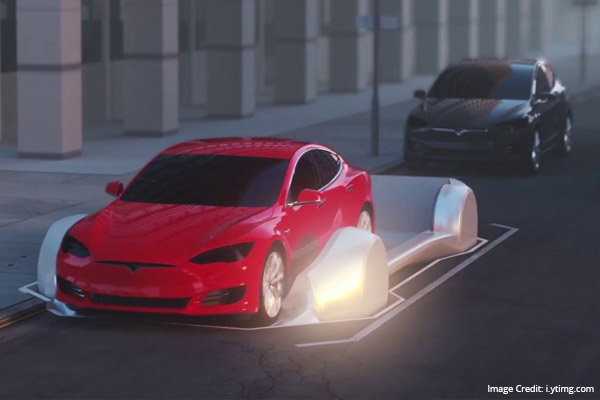 The boring company has several projects and the first one is to build underground tunnels under Los Angeles. The idea is to build a full network of the so called tunnels and fit in sleds.

The tunnels are to be used to transport people, cargo and even cars in fast moving means of transportation over the sleds. Well, this can be said to be one of the most ambitious plan that I have ever heard.

But sitting back and thinking about it, it can be one of the best solutions for the transportation mess that we find ourselves in each day.

Elon Musk started tweeting about the ugly traffic in December of 2016. Apparently, he was held up in one and all he could think off was building a network of tunnels underground to aid in easing the congestion and traffic experienced every single day.

He tweeted that he was thinking of building one of the best boring machines and start digging for personal improvement.

Moments later, we heard of the birth of the new Boring Company that is now making strides in making his thoughts on that traffic day a reality.

According to Elon Musk, this tunnel digging network and project was just a side hustle. However, with the associated growth being seen with each passing day, the project has picking up and interests are now pouring into it.

It might no longer be a side hustle but a full time job for Elon Musk. However, he is yet to confirm or deny this fact.

However, he just released a video showing sample tunnel network showing the sleds, the elevators and of course the tunnel networks itself in April of this year. The project is about to take all his time.

Just last month, he himself confirmed to have had an interesting talk with the mayor that he described as promising. The talk was in regards to building his tunnel network below or under the city.

Even with all the benefits and advantages associated with such a project, there many other factors that local authorities, have to consider such as safety of the people and the land, procedural formats in ensuring ground integrity is maintained among others.

Last week, Elon said that he achieved a verbal approval from the government for him to continue with his work and build tunnels under New York, Washington DC, Philladelphia and even Baltimore.

The success of such an endeavor is yet to be realized and it seems like the Boring Company is finally making some serious moves.

Innovation is born from creativity or worse situations such as being stuck in traffic as Elon Musk and his Boring Company’s automatic elevator.

However, there is always more to each idea depending on the whether you pursue it forward, or you just let it lag behind and finally die.

The Boring Company had no clue as to what they were getting themselves in the first place, no hope could be seen in the project and now, it is finally taking root. Such are the kind of innovations needed in the world today.