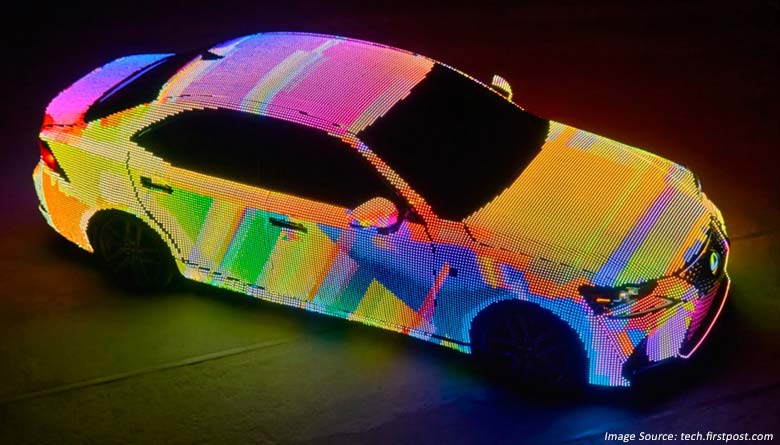 Technology is fast transforming, and the ingenious invention by Lexus has not only confirmed that but has also taken many by surprise, in the most amazing way of course. The Japanese car maker Lexus has designed an SI Sedan care model that features 41,999 Light Emitting Diodes that basically transforms the car into a ‘television on wheels. With these LED lights the vehicle can synchronize the patterns on display by integrating with music thus forming impressive external illusions on its body. In addition to that, the model can broadcast graphics and multicolored animations similar in every aspect to those displayed in advertisement billboards.

This car was a product of an idea between the Japanese automobile manufacturer Lexus and video streaming service provider Vevo, which mostly functioned to promote the model.It is even seen in some of the music videos of celebrity singers-the song Be The One by Dua Lipa to be precise. When it comes to manufacturing, Lexus infused 41,999 Light Emitting Diodes by hand into the vehicle’s external body structure. The LED stripes are very long and could reach lengths of up to half a mile if opened up and stretched end to end. The LED lights are programmable as per the user’s preference and are capable of producing up to 175,000 lumens when fully lit.

According to Lexus, this car model features an interlacing phases of three modes-Attract mode, the Music Viz mode, and the Gesture mode. The Attract mode has colorful graphics that illuminate the most prominent lines of the care thus projecting the outline to the exterior design of the car. The Music Viz mode, on the other hand, is meant for music tracks. The Light Emitting Diodes will automatically synch to any music beat thus creating custom responsive animations based on the tunes playing from inside the stereo of the car. The Gesture mode allows the car owner, or any other user for that matter, to manipulate the animations on the body of the car by use of an external device such as remote control or a gaming console. It allows the active user to directly connect to the car thus allow him or her to send signals to the car while observing the reactions or effects.

The marketing campaign of the vehicle is a collaboration between Team one of Saatchi & Saatchi and Lexus. The two are responsible for creating the brand’s marketing strategy and the incorporation onto Lipa’s song Be The One is just one of the ways of achieving popularity and garnering media attention. Another party involved in the creation of this incredible piece of art is Vevo which strengthens its online impact.

As much as this car is an epic invention by Lexus, its functional significance remains to be seen. Dazzling and appealing to the public is one matter, but it is an entirely different story when it comes to putting this ‘chameleon’ of a car on an actual road where other standard vehicles are also operating. Take for instance, this car is put on a busy road; the attention alone will be an issue traffic police will have to conform with. The car has a conspicuous color that not only stands out from the rest of the crowd but in so doing, alters color on a frequent basis. This can be very distracting to other drivers on the road not to mention the probability of causing accidents. Besides what is the essence of creating a multicolored vehicle like the SI Sedan? Is it just for aesthetic purposes or is there a functional significance to it? It can be argued that the display animations and colors can serve important purposes when it comes to advertisements but then again, advisement on a moving wheel can cause distractions of epic proportions not to mention accidents.

The Lexus LIT IS is an advanced model of car that blends technology, art and science. It is the ultimate piece of invention that will take the automobile industry by storm, if and only if allowed by governments of respective countries. This is with particular reference to its impacts on the road. In addition to that, the fact that the vehicle has LED powered chassis means that it there is an added cost to the normal price of the Sedan model. Whether price-benefits theory will apply to this situation will remain to be seen in the future. A vehicle should only be expensive if the benefits attributed to that expense or expenses can accurately be traced and not just for ostentation purposes. As at the moment, little has been offered by the manufacturer concerning the automobile’s actual price. The same applies to the number of units produced, sold, in production as well as the number consumers should expect in the future.

The LED powered Sedan Vehicle is an incredible blend of different ideas of art and technology. It is the embodiment of ‘Thinking outside the box’ that will put Lexus at the forefront of trending pacesetters in the field of automobile making. However, beyond the vehicle’s visual appeal there needs to be the functional relevance and if Lexus can look into that, then this model will surely be the car to beat for the next generation of automobiles.