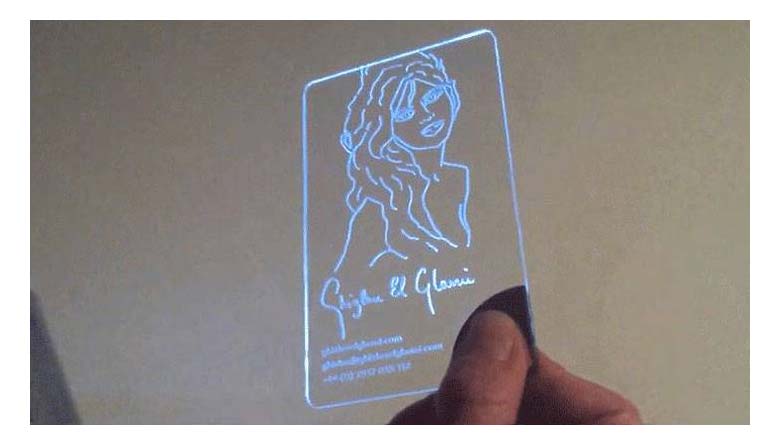 The world of technology is changing at a very high rate. Every day, there is a new innovation, a new device being made etc. The most amazing thing is that most of these developments are thrilling, and we can only expect more to come. Take 3D games for example. A few years ago, if you told someone that such a game would ever come to life, then they would have definitely thought something was wrong with you. What about today? The opportunity to be involved in a game to the point of feeling like you are actually IN the game is quite overwhelming and electrifying. That’s just a snippet on the entertainment side. The contribution of technology in other fields (medicine, engineering, media etc) is huge and it seems there is no stopping. However, discipline is required to ensure that we don’t misuse it which might trigger dire consequences.

In the recent past, a creative agency by the name The Big A, developed an acrylic business card whose details are only revealed when it’s exposed to glowing LED(Light Emitting Diode) light. It works under a phenomenon often referred to as the total internal reflection. The laser imprinted details are made to glow when the LED positioned at the corner is pressed. One person who already has this type of a card is Ghizlan el Glaoui, a renowned artist. However, she agrees that though the card look impressive and all, it is not one you pass around to everybody you meet. They are expensive to make after all and that something we all consider. Well, unless you are Bill Gates. From her perspective, she gives such cards when she wants to make an impression. The card looks cool than the normal ones and will make a statement wherever you go.

Of course considering they just arrived, most people at the moment will deem having such cards as being egoistical. But it’s only a matter of time before people start to afford them and they flood the market. It’s the same thing with having a Porche or a Ferrari. Some people will tend to see you as egoistical, right until they can afford them. Anything beyond the ordinary raises eyebrows at first, until we all get used to it.

Business Cards And The Much They Say About You

Maybe they are the most overlooked among the many things we own. Let’s face it; few of us take time to think about the kind of card we want. So many cards you see today are dull and boring. But must that be the case? What most of us don’t realize is that the moment you pass around a business card, so many opinions are formed by the receiver about you. The card says something about you and the brand you represent. A unique card rarely goes unnoticed while the normal card won’t be taken as seriously as you would have wished.

For those who can’t afford the aforementioned cards, don’t feel like you’ve been locked out. There are so many other options to choose from. If you are looking for something unique that will stand out from the rest, then you can go for:

From 3D movies, 3D phone screens to 3D games, now we go to 3D business cards. Seems like in the near future everything will become 3D something if not E- something. Anyways, 3D cards are unique in the sense that they incorporate a 3D design. How about some 3D glasses on your card?

Guess it’s true; beauty can be found in even the weirdest of places. You only need to look with an open mind.

Technology has definitely done more good than harm. Good thing is when it’s left under the hands of responsible individuals; we expect much more benefits in the near future. Invisible business cards that glow when exposed to LED might be the next big thing. They are classy and unique and definitely make a statement when you give them out. However, you have so many other options of making your cards unique. From 3D business cards to those with a motherboard design, any card design that you ever think of can easily be made. There are online platforms where you can make a customized one or simply visit one of the printing offices and have a unique card printed out for you. If you business card is going to say something about you, let it be flowery and positive!