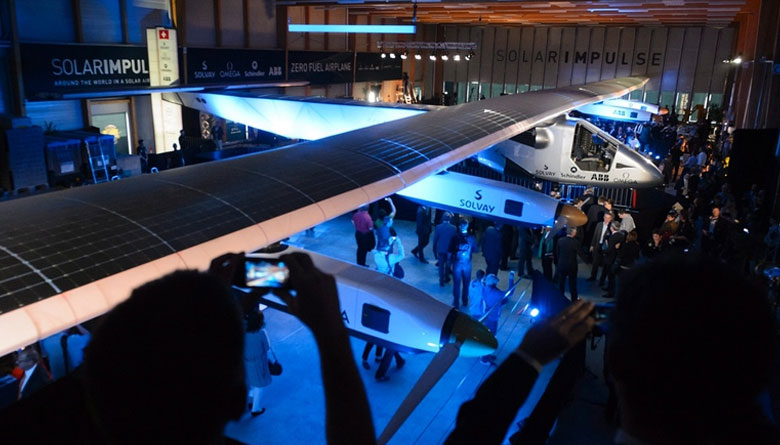 Solar powered plane will attempt to achieve the longest flight duration in aviation history by flying 120 hours non-stop around the world.

The plane, called Solar Impulse 2 is an innovatory aircraft designed to conquer the skies for a consecutive five days and five nights over continents and oceans without using fuel.

This revolutionary aircraft is made out of carbon fiber. The “2” in its name suggests that it is an evolution of another ground breaking aircraft prototype. Solar Impulse 2’s predecessor has recently broken some aviation records such as the first ever aircraft that flew overnight for 26 hours without fuel in 2010.

Solar Impulse 2 has a longer wingspan that spreads up to 72 meters wider compared to a Boeing 747. This aircraft is as heavy as a car at 2,300 kilos. Which means it is very light considering it is an aircraft.

Its solar panels are blanketed on its wings. It has a total of 17,000 solar cells. It is enough to power four electric motors that have renewable energy. It also has lithium batteries that are custom-made to power the plane during the night. 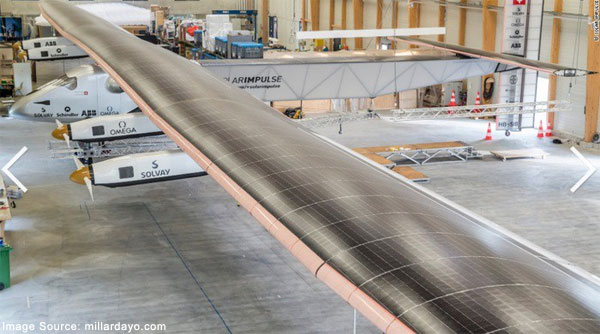 The pilots of this plane have impeccable records. They pioneered an ultra light aircraft; circled the world in a balloon non-stop; and commanded a solar-powered plane within 24 hours for the first time.

Now, the Swiss duo pilots Bertrand Piccard and Andre Borschberg will set a new record of taking the first solar flight non-stop around the world.

Borschberg said this is the first airplane on Earth with unlimited endurance since it can fly from one whole day to theoretically a year. It is very energy efficient, he said.

The plane has extraordinary efficiency

The plane’s cockpit is only half the interior of a 2013 Mini Cooper. This way it can fly with the energy provided by the solar panels. Since it is very small, it is carefully calculated to make it liveable for the pilots. High-density covered foam covers the structure of the cockpit so that the pilots can survive in temperatures from -40°Cto +40°C, especially since it does not have air conditioning and heating devices.

The aircraft has enough space for oxygen, water and food. Its seats are complete with a parachute, a life raft, and it can also be used as a toilet. It reclines to allow the pilot to exercise and stay healthy. The reclining seats also help the pilots sleep, but only for 20 minutes.