Some mobile developers are rushing to release applications that are compatible with Apple Watch while others are still wondering what sort of apps will make sense for the device. Apple Watch already has many wonderful apps some that allow the watch to be used to open hotel rooms and others that allow it to be used to make payments with Apple Pay. Two new apps were launched continue this trend. The two are Knock and oneID, both of which can lock and unlock your Mac computer with just a tap.

Knock first debuted in 2013 with a smart iOS app that let users tap on their iPhone’s screen while the phone was still in their pocket in order to unlock their laptop or desktop computer. The app features a low-energy Bluetooth technology that enables the connection between the devices.

At the time of its debut, the co-founders, William Henderson and Jon Schlossberg, said their long-term vision was a future in which Knock could be used to unlock anything. They had earlier imagined bringing the app to the web browser, but later turned their attention to Apple Watch. They have now rolled out Knock 2.0, the next major release of the Knock iOS app.

oneID, a digital management company, has launched its take on authentication via the Apple Watch. Its new app will be able to lock and unlock your Mac computer and will also enable you to log into websites on your computer. oneID app also lets you securely manage and store your account information for all your favorite services and websites, and turn on two-factor authentication for those sites that require extra security. 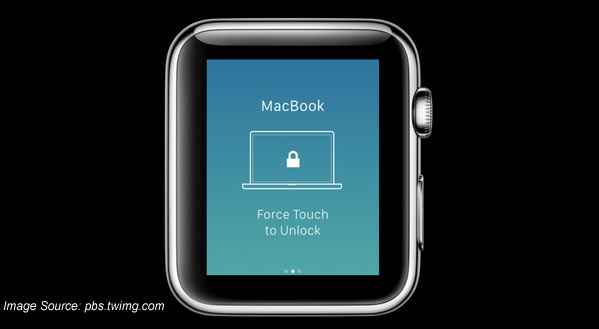 While Knock focuses on locking and unlocking your computer, oneID’s Apple Watch app is about making all the things its service offers easier to access from your wrist. That includes providing shortcuts for things like push notifications, two-factor authentication, unlocking or locking devices and more.

In practice, what this means is that, while you’re in proximity to your Mac computer, you can launch the oneID app.After launching, you can then use Apple’s “force touch” to select the device you want to lock or unlock by pressing on the Apple Watch’s screen.