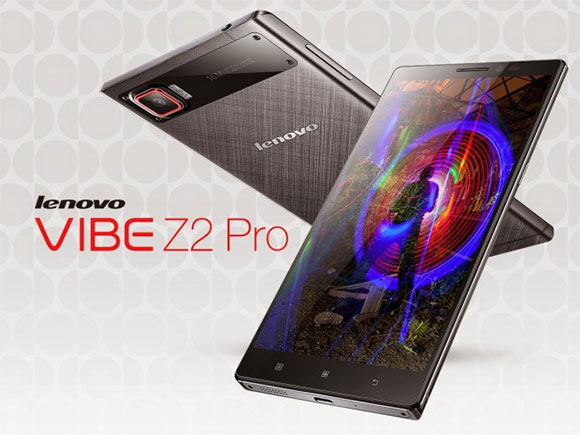 Lenovo has announced a new Android flagship smartphone, the Vibe Z2 Pro. The new six-inch smartphone will arrive in China and other Asian countries in the next few weeks and should be one of the highest-end smartphones on the market.

The Vibe Z2 Pro offers some of the best internals on the market, powered by a 2.5GHz Snapdragon 801 processor and 3GB of RAM. Lenovo will add 32GB of internal storage with microSD card slot, along with dual-SIM capabilities.

We also see the 2K display (2560 x 1440 resolution) coming to the Vibe Z2 Pro, an excellent step up from the usual 1080p displays on the market. Oppo and LG are the only two other companies offering a 2K display on their smartphone.

Lenovo has added a 16MP rear camera onto the Vibe Z2 Pro, coming with dual-LED flash and optical image stabilisation. Internally the Vibe Z2 Pro packs a 4,000mAh battery, larger than the usual internal battery on a phablet.

The design of the Vibe Z2 Pro takes on metal accents and very thin front bezels. It does look a little hard to hold, similar to the Xperia Z Ultra. Lenovo has fitted three capacitive keys on the front of the device, with patterned metal on the back.

Running Android KitKat 4.4 at launch, the Vibe Z2 Pro is up-to-date. Lenovo should add the Android L update whenever it finally arrives. Vibe UI 2.0 will run on the device, Lenovo’s skin for their Android smartphones.

Lenovo might never bring the Vibe Z2 Pro to the West, unlike Huawei, the Chinese company seem fine with the revenue created in China and other Asian countries. Still, getting a commanding lead in the US and Europe could be a big deal.

Currently, Xiaomi is the largest smartphone manufacturer in China, but Lenovo and Samsung are not far behind. The Vibe Z2 Pro might be the move Lenovo needs to take back the number one spot from upstart Xiaomi.