The US Navy announces their own e-reader for service workers 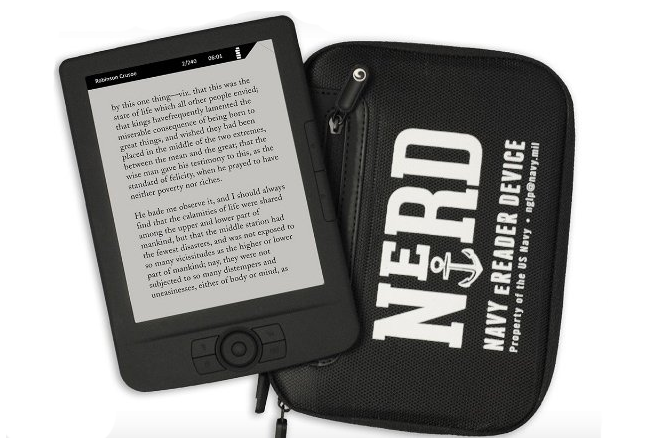 The US Navy does not allow service workers to bring iPads, Kindles or any other electronic device aboard, to make sure spies cannot get cameras inside the vessel and tracking devices cannot be installed to monitor movement.

Even though the risk of a service worker actually using an iPad for that reason is low, it has been the Navy’s robust practices and rules aboard ships that have kept them from being noticed, even when fighting wars.

That being said, the US Navy are preparing to launch their own e-reader for workers aboard the ship, named NeRD. We are not sure if this name was accidental or made on purpose, the actual name is the Navy e-reader device.

NeRD will be swapping out the small cabin library for an e-reader stocked with 300 titles, hand selected by the Navy for reading. The titles include what would be expected, a few fiction books like Tom Clancy, a few non-fiction books about Naval warfare and history and a few classics.

The low amount of books is due to the platform not being able to browse titles fast enough, leading them to a smaller amount. The Navy has said internal storage is at least enough to add a few hundred more books onto the e-reader, but at the moment they are closely monitoring the success of the program.

More titles will be added to the e-reader in due time, even though the device has no Internet connection and cannot process books in the same way a Kindle or iPad can; we believe the Navy will update the e-reader through their own methods, to avoid any possible hacks.

There will only be a limited amount of e-readers on board a vessel, meaning service workers will have to share the device with one another. Even though this is a boost for navy workers that enjoy reading, it does come with some rules and regulations, but this is standard for the Navy.