Samsung Gear Fit 2 rumors got another turn after promotional photos of the device leaked from the company’s website. The photos of this device look as if they were accidentally released, together with the Gear IconX. The photos were later pulled down, but it was too late; the photos were already saved and screenshots were taken. Unfortunately, Samsung has not commented or issued any information regarding these leaked photos.

The leaked photos offered us an opportunity to predict what we should expect on the new Gear Fit2. From the photos, the device shows that it will allow you to track distance, and heart rate. But there is something surprising, as it looks as if you shall soon be able to view mapped routes on the screen.

After the leak of the two devices images from the company’s website, other official looking photos were released by the Evans Blass, the serial leak-star, which is almost enough indication the launching is imminent, and it’s like we have a clear picture of what we should expect.

From the photos released by Blass, it is shown that the Gear Fit 2, maybe available in three colors; blue, pink and black. These images also show as if the second Gear Fit2 will have an altimeter, which will track elevation. This feature could be a big deal as you burn calories when taking stairs and running up a hill.

The Gear IconX is predicted to be a fitness tracker with a music player. If these are the real photos, the device will have touch controls, water, and dust resistant design. These features seem to suit the environment and the role the new device will support. Also, there is a likelihood of having a 4GB onboard storage, which will offer you enough space to store your music. It will also have a charging case, which will keep the device charging as you move.

While there were no indications of the device specification and features from the leaked images, there is enough information to predict the features of the device. Tech enthusiasts and those who have been tracing the development of these wearable tech says that they have close to enough information to know what we are expecting. It is almost clear that the new device will have the 1.84” curved AMOLED touchscreen. The design of the screen looks tweaked making it look a bit curved and ergonomic, adding to its style.

The screen is more suited in illustrating various health monitoring and fitness data. This can include, targeted and covered distance, the layout of the running trail and the heart rate. The device also looks, as it will be more comfortable on your wrist, than the predecessor, judging from the overall design and straps. The design and the curved body, all stands out, which will definitely make this device a combination of style and performance. The Samsung bio-processor is expected to support more than just recording your BPM, calories and the steps you have taken, so, expect more functionalities.

The surprising feature of the device will be the device onboard GPS. This means you will be able to track activities, for example running, without the need of your smartphone GPS. If this will be the true look and features of the device, then this device will automatically qualify to be a competitor to the Microsoft Band 2, which is among the few smartwatch/fitness tracker that are GPS enabled.

Samsung released the premier Gear Fit in 2014, which had a curved AMOLED touchscreen, and heart monitor, which was inbuilt. At the same time, Samsung took the unexpected decision of using the new real-time operating system. (RTOS) 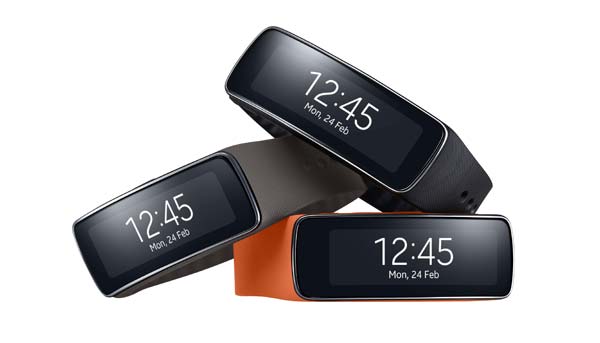 There is no clue on when the Gear Fit2 will be released from the leaked images. The leaked images, which looked promotional, suggest that the release may not be very far. Likewise, the price of the wearable device is still unknown. The Premier Gear Fit was released in February in 2014, and it’s possible the second Gear Fit2 may be released In June.

Earlier this year, another leak of Samsung Triathlon Budget Fitness Tracker appeared, however, up to date the giant smartphone maker has not addressed any of these rumors. Luckily, from these leaks, we can clearly tell that Samsung has a lot of wearable tech development going on. This is a win for the consumers and also gives us a reason to keep an eye on the company.