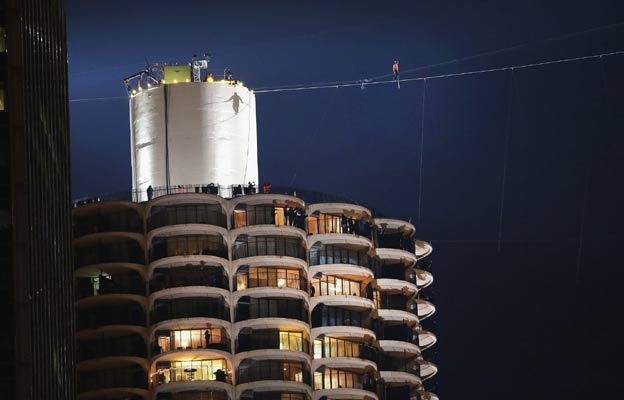 Daredevil Nik Wallenda walks between two high-wire Chicago skyscrapers without a net or harness, doing the second walk blindfolded and broke two world records on Sunday with to the cheers of a crowd numbering in the tens of thousands on streets below, Wallenda spoke joyfully of the view as he walked the wire over the Chicago River. As he move toward the end of the first walk he said, “God is in control.”

For the first walk on a steel wire, the 35-year-old Wallenda went more than two city blocks uphill, rising at a 19-degree angle, from the west tower of the Marina City towers to the Leo Burnett Building more than 50 stories above the Chicago River.

In the history of the “Flying Wallenda” this was the highest skyscraper walk, and the first time Wallenda make an effort to walk at such a steep angle. The walk broke the world record for an incline high-wire walk, according to a representative from Guinness World Records interviewed on the Discovery Channel, which broadcast the event.